African wild dogs are the largest indigenous canine and a highly specialized species for a hyper carnivorous diet in Africa. It has large, rounded dark ears, long legs, and a bushy tail usually with a white tip.

The body is irregularly blotched with black, white, brown, and yellowish-brown. No two dogs have exactly the same markings and coloration so each animal has its own unique color pattern.

African wild dogs have black muzzles with a black line continuing from muzzle to between ears. It is also called the painted dog or Cape hunting dog.

African wild dogs are said to have very strong social bonds than lions and spotted hyenas living in permanent parks that are variable in size of usually 2-30 adults and sub-adults.

African wild dogs are considered to be territorial in the sense that other outside dog families are not tolerated in the family. The dominant male and female mark territories with droppings and urine.

African wild dog species differs from other social species because males remain in their mother parks, they rarely disperse because when they do they are rejected by other parks already containing males while females disperse to join other parks. This habit is also found in gorillas, chimpanzees, and red colobuses. 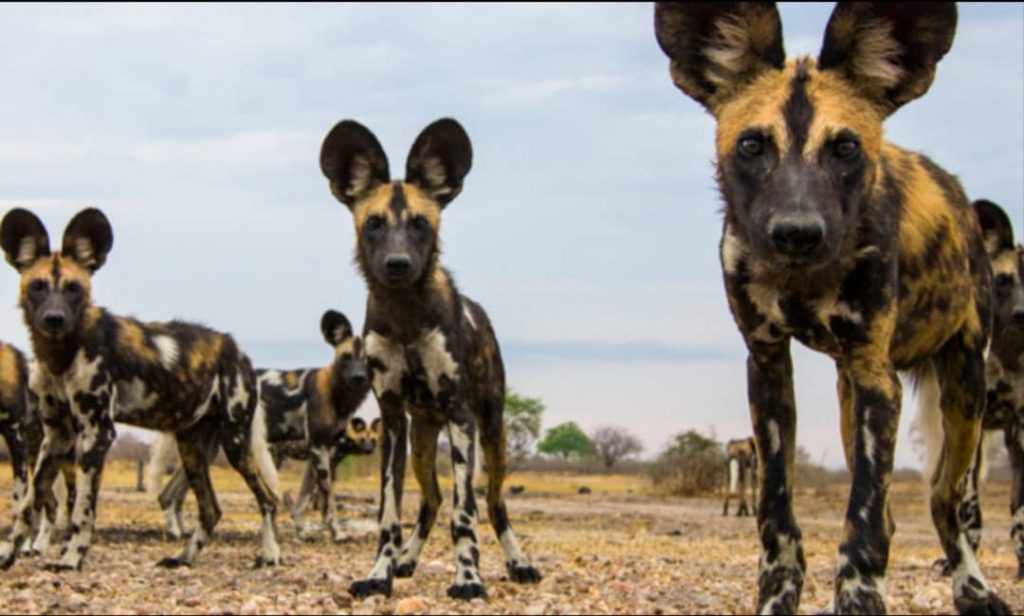 Hunting is done by dogs moving slowly and silently towards the prey and they increase the speed as the prey tends to move away. The chasing clocks at up to 66km/h for 10-60 minutes. Most hunting takes place during cooler morning and afternoon hours.

Medium-sized preys are killed in 2-5 minutes and large preys usually take 30 minutes. when chasing bigger prey, African wild dogs bite the legs, belly, and the rump until the prey gives up and smaller prey is simply pulled down and torn into pieces.

African wild dogs are very small in size but they have a higher success rate (70%) when it comes to killing prey than lions and leopards. Hunting success rates are influenced by season, vegetation cover, park size, and the type of prey being chased.

African wild dogs have god good hunting strategies and this depends on the type of prey.  They isolate a vulnerable individual in the bigger preys while the antelope species which depend on themselves on running are captured by cutting off their escape routes.

Small prey is eaten entirely while large animals are stripped of their meat and organs, with the skin, head and skeleton left intact. An old dog can consume up to 6kg per day.

Unlike other social predators, African wild dogs regurgitate food for adults and pups.  Pups that are old enough to eat are given first priority to eat even before the dominant ones. Subordinate dogs help to feed and protect the pups when the rest of the park is out for hunting.

African wild dogs are monogamous. During estrus, the female is closely accompanied by one male keeping other members away.

Pups are usually dropped during the dry winter season when the grass is short and hunting conditions are at their best after a gestation period of 69-73 days.

7-10 pups are born in abandoned burrows of other species and will remain in the den with their mother while the rest of the park goes hunting for about 3 months and the mother forcefully drives away members trying to approach pups until they are old enough to eat. At 8-12weeks, the park abandons the den and pups follow the adults during hunts.

African wild dogs can go for up to 15 years.

Your 5 Days safari in Uganda features a perfect blend of 2 primate adventures and wildlife experience. This package takes you on chimpanzee tracking in Kibale Forest National Park which offers refuge to 13 primate species. Book This Trip