The Ugandan Kob is a medium-sized antelope that is powerfully built found in sub-Saharan Africa of South Sudan, Uganda, and the Democratic Republic of Congo.

The male is a robust, powerfully necked animal, carrying heavy, laterally ridged, lyrate-shaped horns. The female is light and does not have horns.  Uganda cob has a dark reddish-brown coat with relatively fewer distinct white markings on the face but a pale to white eye-ring and a white patch on the upper throat. It holds close resemblance to the impalas only that it is more strongly built.

On a trip to Uganda, you find large numbers of these kobs in Queen Elizabeth national park and Murchison falls National Park.  These areas entail vegetation cover that fits the kob habitat. They like open grasslands to trace danger from predators.

Ugandan kobs live in groups of either males or females with their calves in herds of 15-40 animals and sometimes big gatherings of hundreds in some seasons.

Males are territorial and they usually mark their territories using whistling sounds this maintains herd units to remain together and non-territorial rams form a fluid and loosely attached bachelor herds.  In areas of high densities, adult rams a very small territory of about 15 females, and females move freely in the rams’ territories.  The territorial groupings are also known as Leks.

Dominance in males is gained through ritual fights of clashing and twisting each other’s horns and if one ram loses, he is forced out of the family to join other bachelor rams until he gains the strength to challenge the dominant ram.

Female kobs usually lead groups followed by calves and rams when moving while feeding and looking for water.

Ugandan kob breeds all year and birth are not tied to seasons in most areas.  After a gestation period of about 240 days, a single calf weighing about 4-5kgs is dropped.

The calf breastfed for around 7 months and after that period, it starts feeding on grass.

When a ewe (female kob) is in the breeding season, the ram tries to hold her briefly within his area in order to mate with her. The males use a soft human approach when in courtship and rams will not force the ewe to be part of his family during and after mating but rather convinces her to stay by making soft noises and whistling.

In the world, Ugandan kob can live for 9 years. 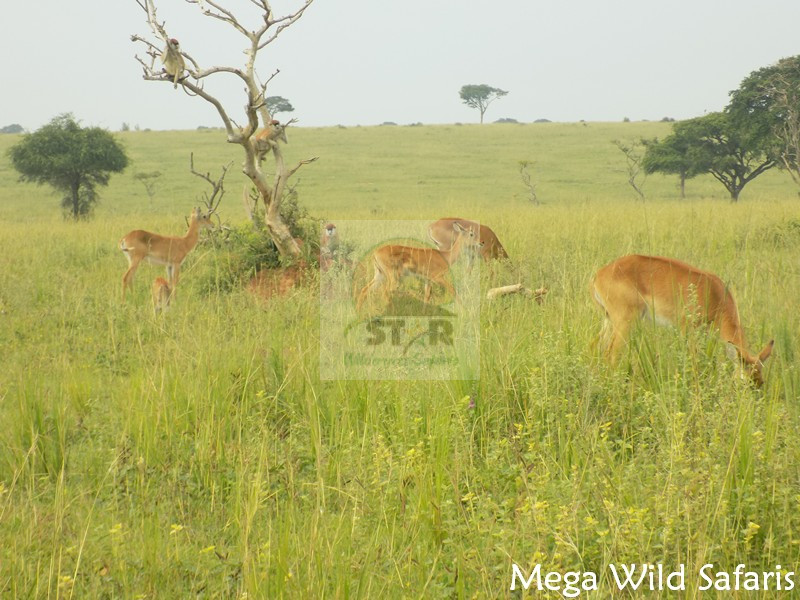 7 Days Uganda safari is one of the best wildlife and primate safari packages you should book. It provides you a great chance to engage in diversity of wildlife activities ranging from chimp tracking, gorilla trekking, game drives, launch cruise and Batwa cultural experience. Book This Trip