While in these two parks, you will see various wildlife species like Mountain Gorillas, forest elephants, buffalos, monkeys in Bwindi, and a big number of zebras, topis, Uganda kobs, giraffes, among others.

You will also experience a number of bird species in Lake Mburo and relatively in Bwindi as well. Above all, you will enjoy a comfortable and hospitable climate and nature 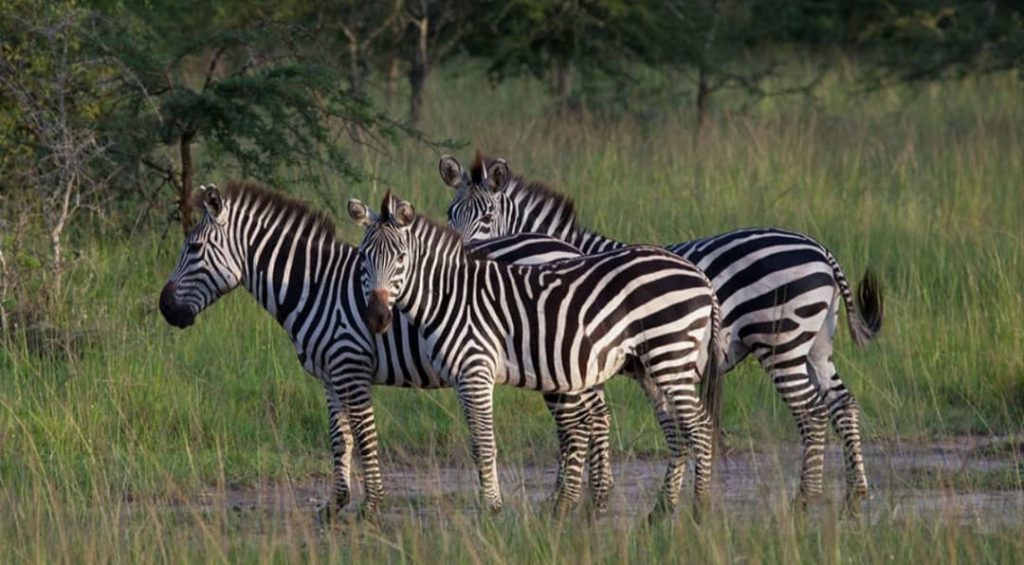 The journey is too long here and so you have to wake up as early as possible to prepare. After breakfast at around 7:00 am, our guide driver will drive in at your hotel in Kampala. You will have few moments as he briefs you before you hit the road for the 8hrs trip.

Drive to the southwestern part of Uganda to Bwindi. This journey will be incredible as you will be seeing various things on the way such as coffee and banana plantations, valleys, topographic roads, vegetations rolling hills etc.

You will have a stopover on masaka road at the equator for photo taking moments. You may opt to have a cup of coffee or proceed after.

You will have another stopover in Mbarara town to have an en route lunch. This will be a short stop to beat time. You will embark on the road through the terraced kigezi highlands, later arrive at Bwindi impenetrable National Park which hosts a rich ecosystem of different living organisms which you be viewing the next day.

You will head straight to your lodge to check in, have moments to relax before dinner and overnight. You have to rest early for you another tiresome yet exciting day the following morning

The day is finally here. Wake up as early as possible to have enough time to prepare, have your breakfast on time and even pack some lunch since you won’t be able to return back for lunch on time, pack enough water as well to help you during the long trek.

You can also pack other things like a camera. You might need to have sturdy shoes, sun glasses, rain jacket and a pair of long trouser.

Your guide will take you to the information Center for briefing and hand you over to the park ranger guides to take you through the trekking.

After trekking, enter the mighty Bwindi forest as led by park rangers who will take you to where the gorillas can be located at that time.

The activity takes 2 to 8 hours, this is because these gentle giants migrate and cannot stationed at one place. The move basing on the availability food and water. Also remember no skill is needed to trek gorillas through one need only to be fit enough

There is nothing as astonishing and thrilling as watching the silverbacks guard their bases, watch the females feed young ones, play, and grumble at each other among other things.

You will take as many photos as you can as you are only allowed to spend only an hour with the family they allocated.

Would you wish to spend a full day with one family this can also be arranged? Return to the lodge and rest. In the evening if time allows, you visit the Batwa community and experience how they live. After return to your lodge for dinner and overnight

After breakfast in the morning, you will check out from your lodge. Your driver guide will come for you for transfer to Lake Mburo National Park.

You will drive eastwards to the park a home to large numbers of antelopes and other animals like Buchells Zebras, hippos, warthogs, buffalos and birds leaving the spectacular Kigezi highlands behind passing via Mbarara which is the home to the long-horned cattle. You can ask your guide anything you spot on your way and needs clarification

You will have lunch along the way preferred in Mbarara en route to the park. Later arrive in the park, check in at your lodge and have an evening game drive. Later have dinner and overnight

Early in the morning have your breakfast, as set out on a boat cruise safari. You will be able to sight other smaller lakes like Lake Bwa and lake Kazamu. Also enjoy watching buffalos, hippos, crocodiles, near the shallow waters. There will be a chance to see the birds like the crested cranes, saddle bill stork, Abyssinian ground hornbills among others

After you will head back to your lodge, unwind, as you relax at the bar area or the swimming pool. Later have lunch and say goodbye to the park staff as you check out from your lodge and embark on a journey back to Kampala. You may opt to stop at the equator for some photos and buy some crafts at the nearby shops. You will arrive in Kampala late evening

Activities to do on this safari:

What You Need While Going for Gorilla Trekking

Gorilla trekking can be very tiresome and you need to refill your tank as the trek goes on. It is advisable to park a few water filtrations tablets before you come for the trek

you will need good waterproof comfortable shoes. Sometimes it rains during the trek, so skid proof shoes can come in handy

You will need Garden gloves because you will be grabbing tree branches, leaves etc. and some can be thorny

Carry a good camera (no flash) to capture this lifetime experience

Lake Mburo National Park, is a very special every part of it is alive with variety, interest and color. It contains an extensive area of wetland and also harbors several species of mammals and birds found nowhere else in Uganda.

Its sculptured landscape, with rolling hills and idyllic lake shores has a varied mosaic of habitats; forest galleries, seasonal and permanent swamps, rich acacia- woodland and grassy valleys which all support a wealth of a wildlife

At 370 sq Km. lake Mburo National Park is small in comparison with many other East African Parks, but with its rich variety of habitats; dry hillsides, rocky outcrops, bushy thickest, open and wooded savannah, forest, lakes and swamps, it is home to a surprising diversity of plants and animals

Lake Mburo is the only park in Uganda with Eland, Impala and Klipspringer. It is also home to the largest population of Zebras in Uganda estimated at about 5,000 and probably contains the highest concentration of leopards found anywhere in Uganda.

At the center of the park is lake Mburo, which together with 14 other lakes in the area, forms part of a wetland system. This system is linked by a swamp some 50 km long, fed by the Ruizi River on the western side. Five lakes, of which the lakes largest is lake Mburo, occur within the park’s boundary

Almost a fifth of the Park’s area consists of wetlands-both seasonally flooded and permanent swamps. The various types of swamps are home to wide variety of wetland birds, as well as the shy, rare sitatunga antelope.

Lake Mburo’s surface and its fringing vegetation are always changing, and its delightful to take a boat cruise out and experience the lake’s moods and watch numerous hippos, some crocs and an incredible number of African fish eagles.

Bwindi is derived from the Runyakitara word “mubwindi” and means “a place full of darkness” this name comes from the extensive stands of bamboo interspersed amongst the larger forest hardwoods.

The bamboo and thick ground cover of ferns, vines, and other plants growth severely hinder direct access on foot.

The forest is on the edge of the western arm of the great rift valley, only a few kilometers from the Democratic Republic of Congo (DRC) border and about 25 kilometers (16 mi) north of the Virunga Mountains

The forest is one of the most biologically diverse area on earth where half the world’s population of the highly endangered Mountain Gorillas live in its natural habitant jungle.

The forest has been recognized by the United Nations Educational, Scientific and Cultural Organization as a world heritage site for its biological significance 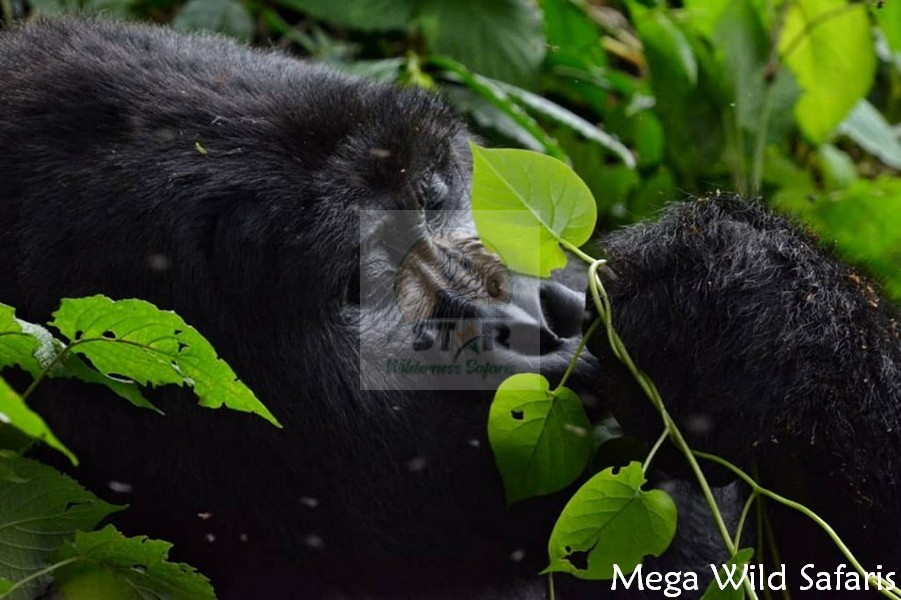 The forest has been described as “riven by disputes and crosshatched by historical, political, biological boarders” by the researcher Craig Stanford, co-director of the park’s jane Goodall Research center. In 1991, the Bwindi Impenetrable National Park was established

It is located southwestern Uganda. The park part of Bwindi Impenetrable Forest.

The Park is on the edge of the western arm of the great rift valley, only a few kilometers from the Democratic Republic of Congo (DRC) border and about 25 kilometers (16 mi) north of the Virunga Mountains.

Composed of 321 square kilometers (124 sq mi) of both Montane and lowland forest, it is accessible only by foot. BINP has been recognized by the United Nations Educational, Scientific and Cultural Organization as a world heritage site for its biological significance

Species diversity is a feature of the park. It provides habitat for 120 species of mammals, 348 species of birds, 220 species of butterflies, 27 species of frogs, chameleons, geckos, and many endangered species.

Floristically, the park is among the most diverse forest in East Africa, with more than 1000 flowering plant species, including 163 species of trees and 104 plant species of ferns.

The northern (low elevation) sector has many species of Guineo-congolian flora, including two endangered species, the brown mahogany and Brazzeia longipedicellata. In particular area shares in the high levels of Endemisms the Albertine Rift

The park is a sanctuary for colobus monkeys, chimpanzees, and many birds such as hornbill and turacos. It is most notable for the 400 Bwindi Gorillas, half of the world’s population of endangered mountain Gorillas.

Habituated mountain gorilla groups are open to tourism in four different sectors of Buhoma, Ruhijja, Rushaga and the Nkuringo in the Districts of Kanungu, Kabaale and Kisoro respectively all under the management of Uganda Wildlife Authority

Your 5 Days safari in Uganda features a perfect blend of 2 primate adventures and wildlife experience. This package takes you on chimpanzee tracking in Kibale Forest National Park which offers refuge to 13 primate species. It also allows you engage in mountain gorilla trekking in Bwindi Impenetrable National Park a home to 20 habituated gorilla families and over. Book This Trip