Bird Watching Safaris in Uganda the pearly of Africa is known to many as the birders paradise because of the variety of bird species in the country. This has seen Uganda rise among its competitors as a prime destination for birders facilitating the increasing number of birders in a calendar year.  It is no secret that Uganda’s climate and its vegetation are one of the reasons why the country has so much diversity of birds, including the forests which are both manmade and natural, its fresh water lakes and other water bodies that give life to marine animals and birds and the wet lands that are home to varied species altogether. A combination of all these facilitates the existence of the so bird-rich areas that easily can’t found by other destinations.

This Ramsar site is found on the shores of Lake Victoria with coverage of over many hectares of swamp vegetation. It’s approximately an hour’s drive from Kampala city center. This particular area boosts close to 260 species of water endemic birds. Birding safaris in this particular area are done using a dugout canoe to enable closer or higher chances of seeing the birds. One of the famous residents includes the rare shoebill stock, a rare sighting for most birders. Other species here include papyrus gonolek, long-toed lapwing, pied king fisher, hammerkop, white-faced whistling duck among other species. This area also presents a famous birding site in Uganda found on the shores of Lake Victoria. This particular area is home to over 200 bird species of which some an estimated 26 species are migratory. This bird-rich area is home to species such as sooty chat, tropical boubou, and African pygmy king fisher among others. This birding haven is found in Magombe swamp with such rich biodiversity around Kibale national park area. It uses the community-based approach of natural resource management thus ensuring the longevity of this particular area and its residents including the birds. It boasts over 200 bird species which make it a favorite birding safari destination.  Birds like the great blue turaco, white-winged warbler; blue shouldered robin chat, red-headed malimbe, and the papyrus gonolek are a common sighting. The park is situated on the western side of the country and is Uganda’s most popular national park. It not only boosts of its scenic beauty, diversity in eco systems, but it is also a home to over 600 bird species. These are supported by sprawling savanna, shady trees, sparkling lakes and lush wetlands that support not only wild game but also birds. Highlights in Queen Elizabeth national park include among others the migratory water birds which can be spotted around Kazinga channel, seasonal flamingoes on the soda lakes of Katwe and Kyambura, birding in areas of Maramagambo forest and also the Lake Edward flats in Ishasha. The park was established as a forest reserve in the 1940s and was later upgraded to national park status in recognition of a biodiversity that it had. And in this biodiversity is over 370 bird species along Kanyanchu forest trails and Bigodi.  Of the 370 bird species, 6 species are endemic to the Albertine rift region which includes red-faced woodland warbler, purple breasted sunbird, black-capped Apalis, blue-headed sunbird, collared Apalis and the dusky crimson wing. Other exciting bird life in Kibale include the green breasted pitta, black bee-eater, eastern nectar, Kibale ground thrush and the Abyssinian ground horn bill among other birds making Kibale Forest National park one favorite sport for birders. 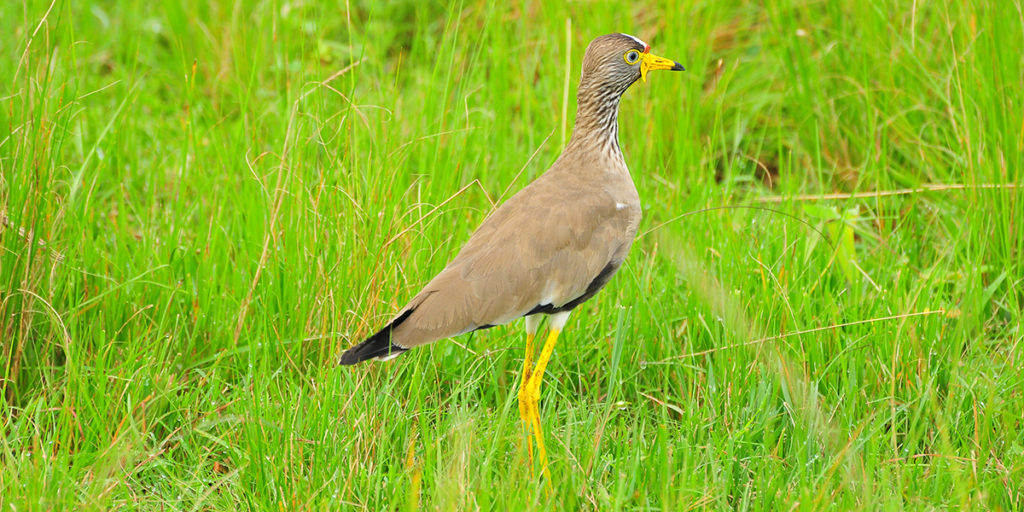 This is Uganda most prestigious national park due to its strategic location as home to the biggest number of mountain gorillas in the misty slopes of Bwindi. Bwindi was chosen as a UNESCO natural world heritage site in 1994 to safe guard its beautiful biodiversity. It’s not only rich in biodiversity but also has remarkable bird life with 357 species and 23 Albertine endemics that can be seen in areas of river Lvi trail between Buhoma and Nkuringo, Munyanga river trail, Ruhija bamboo trail and Mubwindi swamp trail. Birds such as Shelly’s crimson wing, blue-headed sun bird, and short-tailed warbler are common in this area. This park started as a game reserve in 1926 and was later elevated to its current status in 1952. Murchison Falls National Park is home to an estimated 451 bird species making it Uganda’s most strategic birding destination. Birding can be done on the Nile delta cruise downriver from Paraa to the Nile delta which has papyrus islands and is rich of water birds including the rare shoe bill. The Kaniyo Pabidi is another strategic birding area with the Albertine endemics and other range species namely the Puvels Illadopsis, white-thighed horn bill, and the chocolate backed kingfisher. Found in the western part of the country, Lake Mburo national park is a favorite birding spot for birders because of the presence of an estimated 332 bird species. These include emerald-spotted wood dove, bare-faced go-away bird, red-necked spur fowl, common quails, black-billed barbet, and rare African finfoot among other species. These can be sited in the acacia woodland, the northern fringe of lakes papyrus wetland, and the Rwonyo launch. In the park where Gold meets silver, there is a chance to meet an estimated 115 species of birds that thrive in Virunga terrain; it’s also one of the parks that harbor the Albertine endemics and other forest birds. This can all be sighted in Sabinyo gorge and the saddle between Sabinyo and Gahinga. They not only offer a chance for birding but also the scenic beauty the park has to offer. Other common birding areas include Entebbe botanical gardens and the Ziwa rhino sanctuary. All you need for a birding safari in these areas are comfortable shoes, sunscreen, mosquito repellant, binoculars, and a bird checklist to embark on an ideal birding safari.

Costs For Single Travelers Per Day